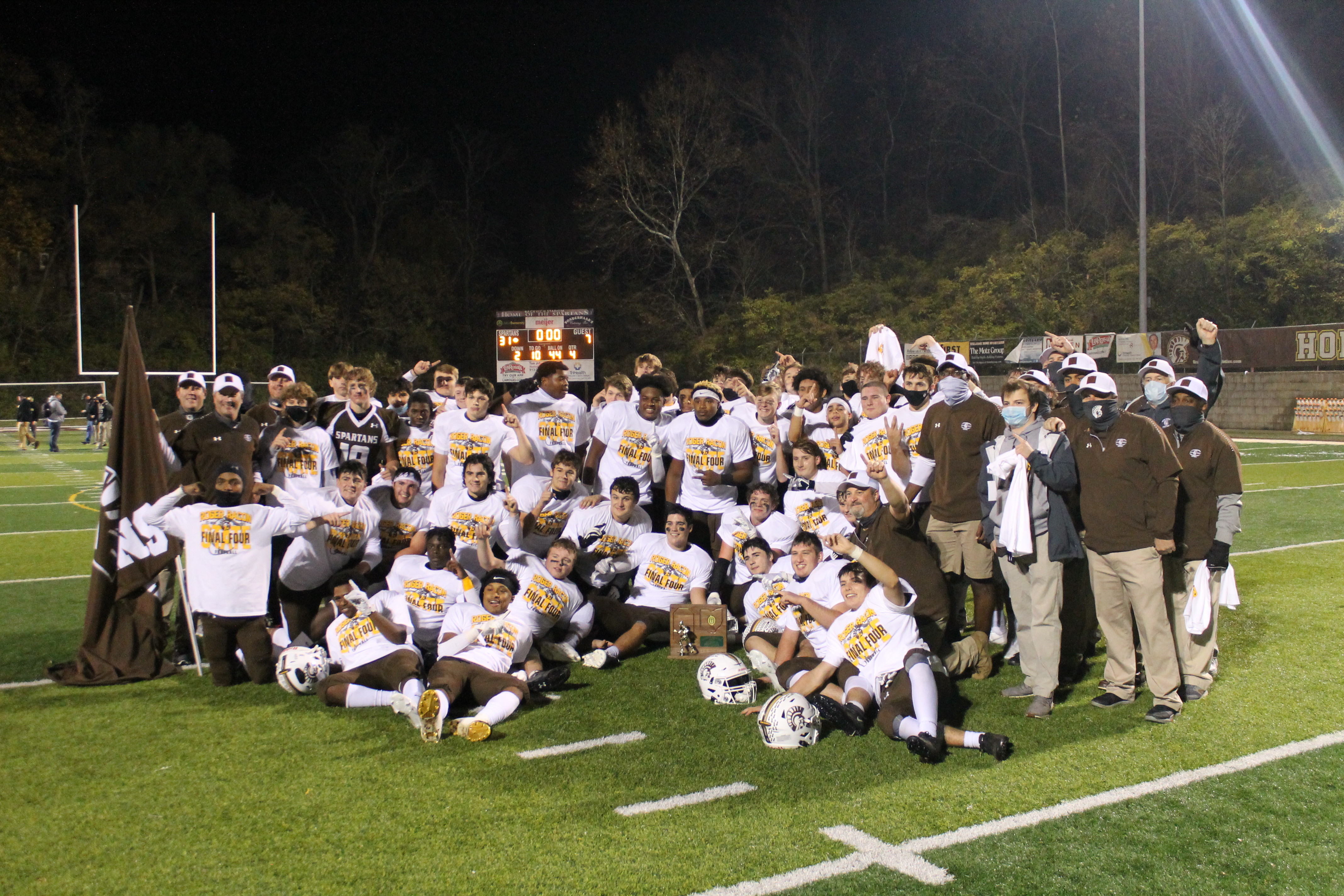 The Spartans state tournament run came to an end in the Division V state semifinals with a 22-19 loss to Ironton at Bowlus Field in London.

But it was a season for the history books as Roger Bacon went 10-1, won the Miami Valley Conference outright and became the first team in program history to win a regional championship and advance to the state Final Four.

Spartans faced a 13 – 0 deficit with 10 minutes left in the first half but then put their foot on the gas and dialed in and scored two TDs within 57 seconds in the second quarter to tie the game up at 13 – 13. The first TD was a 20 yard pass from Logan Huber ’22 to Ryan Hallau ’21. That TD pass was set up by a forced fumble & recovery by Kyle Guyer ’22.

Three plays later, the Spartans forced another fumble and Evan Webb ’21 recovered at the RB 31 yard line. Spartans then pulled out some trickery as Danny Hudepohl ’21 got the ball in the backfield on a reverse and threw 31 yard TD pass to Jake Tschida ’22 to tie the game up heading into halftime.

During Ironton’s first possession of the second half, Evan Webb came up big once again forcing and recovering a fumble to give the Spartans momentum. The Spartans then marched down the field on a 12-play 85 yard TD drive led by Corey Kiner ’21 who had 7 carries for 59 yards and a TD on the drive. The TD run by Kiner was setup by a huge first down pickup by Jah’mal Hutsell ’22. This gave RB their first lead of the game at 19-13

Spartans led heading into the final quarter but Ironton bounced back and retook the lead after a TD and a safety. The Spartan defense locked in with 5 minutes left and forced a punt with 4:59 left in the game to give the offense one more shot. Couple of huge plays occurred on the last drive including a one handed catch by Hallau on a 3rd & 14 to give the Spartans life. Unfortunately, the Spartans could not capitalize after that and their historic season came to an end.

This class of 2021 seniors helped lead RB to a 20-3 record over the last two seasons which includes a 13-0 record at home. Their two playoff losses combined by a total of 4 points. Thank you to our amazing 16 seniors!