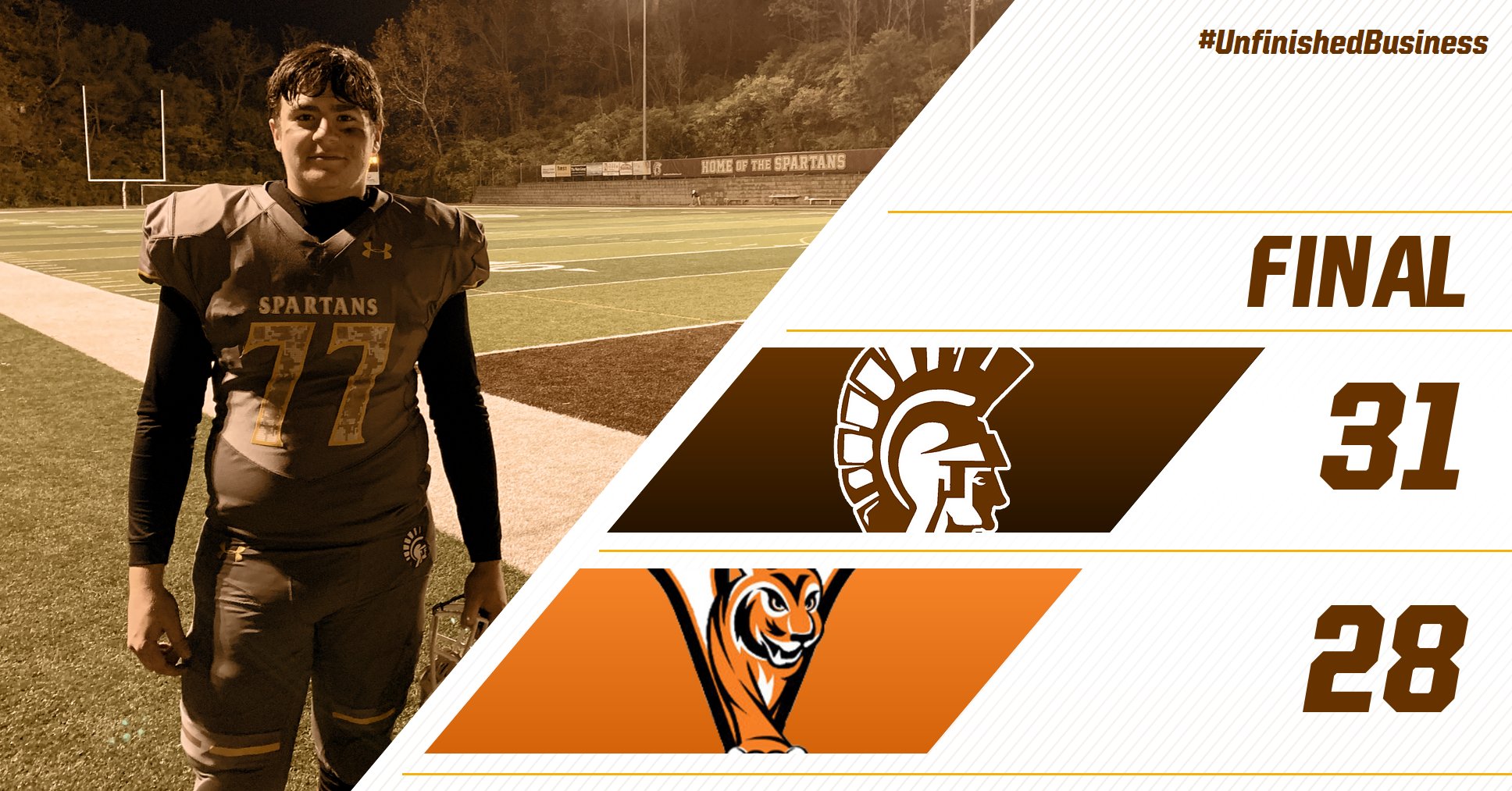 After running through the Miami Valley Conference and the first two rounds of the postseason with eight consecutive victories by at least 22 points, Roger Bacon encountered its first dogfight of the season when No. 4 Versailles visited Bron Bacevich Memorial Stadium on Friday.

The top-seeded Spartans opened up a double-digit lead, then held on to defeat the visiting Tigers, 31-28. The win catapults Roger Bacon into next Saturday’s regional championship game.

On Halloween, there were no tricks when it came to Roger Bacon’s offense as LSU commit Corey Kiner ’21 saw the bulk of the workload in the Spartans’ backfield. On his second attempt of the game, Kiner ran for a 27-yard touchdown to give Roger Bacon a 7-0 lead.

On his next attempt, Kiner raced 82 yards for a touchdown to give the Spartans a 14-0 first-quarter lead. Kiner finished with 211 yards on 21 attempts. He’s now scored multiple touchdowns in every game this season.

Roger Bacon scored touchdowns on all four of its first-half drives. Quarterback Logan Huber ’22 was efficient through the air, going 11-of-17 for 174 yards and a touchdown. Huber was able to spread the wealth Friday with five different receivers tallying a catch.

Late in the first quarter, Huber hit Jake Tschida ’22 for a 52-yard gain to move into Versailles territory. Five plays later, on fourth-and-14, Huber broke out of the pocket and fired a 25-yard touchdown strike to tight end Ryan Hallau ’21 to give Roger Bacon a 21-7 lead.

Tschida finished with a team-high 73 yards on three catches. Hallau had three catches for 52 yards and Jah’Mal Hutsell ’22 and Kyle Guyer ’22 each had a pair of receptions.

Alongside Kiner, running back Danny Hudepohl ’21 has started to emerge to give the Spartans a dangerous 1-2 punch in the backfield. Hudepohl had 46 yards on eight carries and a 1-yard touchdown plunge with 50 seconds left in the first half to put Roger Bacon up 28-14 at the intermission. Hudepohl has now run for 278 yards and three touchdowns on 25 carries in three playoff games.

After punting on its first two possessions, Versailles found its footing offensively late in the opening frame. The Tigers scored on back-to-back touchdown drives in the first half.

The Tigers were within 30 yards of the game-tying touchdown midway through the fourth quarter, but Roger Bacon senior defensive back Alex Wolf’s ’21 third interception of the year ended a promising drive. The Spartans responded with a 12-play, 58-yard drive with Hudepohl and Kiner each running for 28 yards to set up Dylan Rolfert’s ’22 37-yard field goal to seal it.

Roger Bacon moves on to play Springfield Shawnee, which ended Mariemont’s Cinderella run Saturday night, 21-7. A victory next Saturday would send the Spartans to the state semifinals for the first time in program history.