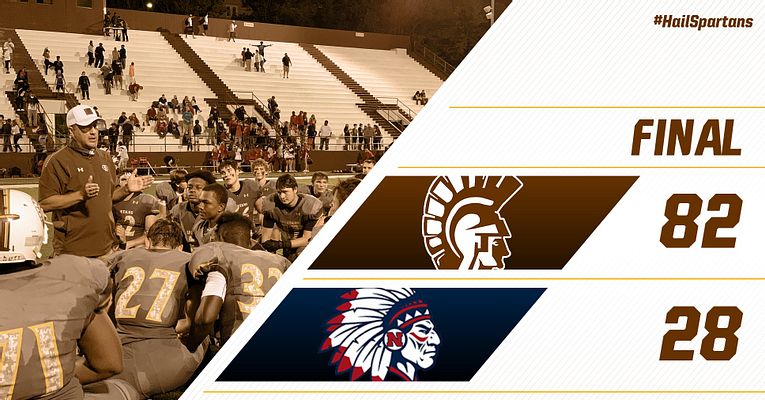 Friday night was one for the record books after the Spartans defeated Norwood 82-28.

Spartans struck first and never looked back. Norwood was able to get within one score a couple times but then after that, the Spartans took over.

Corey Kiner ’21 broke his own school rushing yard record after rushing for 363 yards on 17 carries with 7 rushing TDs. 7 TDs ties the school record also held by Kiner. What is more impressive is that he broke his own record in just one half of play as he ran for 334 yards in the first half. When asked about his first half performance, Corey said “It’s all the O-line, man. All them.”

Beamer Walker ’23 scored his first career TD off a 47 yard pick six in the first quarter which provided a huge boost of momentum for RB. Ryan Hallau ’21 found the end-zone twice in the 2nd quarter after Logan Huber ’22 found him on a 5-yard TD pass to the back of the end-zone. Hallau then made an incredible one handed interception from the defensive line position and took it to the house for the Spartans 2nd defensive TD of the half. Spartans led 62-20 at halftime.

Spartans started to slow things down in the second half but were still able to put 20 more points on the board as Jah’mal Hutsell ’22 got his chance to shine and did not disappoint. Hutsell found the end-zone twice on runs of 8 and 38 yards.

Spartans are now 3-0 and atop the MVC. RB will take on Summit Country Day next Friday at Summit. Summit will have VERY low ticket allotment but the game will still be live streamed.