Most goals in one season

Most assists in one season

Most saves in one season

Most shutouts in one season 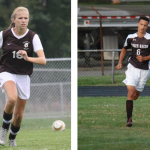 On October 11th, two Spartans found their way to ranking #1 in career record categories! Kaylee Sunders ’18 recorded her 115th career point which breaks the girls soccer record of 114 set by Mindy Ballinger ’92! Kaylee also recorded her 11th assist of the season which ties the school record! Austin Fulton ’18 recorded his

Kaylee Sunders ’18 and Austin Fulton ’18 are closing in career records in their final season of high school soccer. Kaylee is currently 17 points away, 14 goals away and 4 assists away from ranking #1 in Roger Bacon Girls Soccer history in all three categories! Kaylee has verbally committed to playing soccer at Tennessee